An op-ed article describing the negative impact of the 40 percent “Cadillac tax” on employer-sponsored health plans, authored by Council President James Klein and Laborers’ International Union of North America (LIUNA) General President Terry O’Sullivan, was published in the “Beltway Insiders” section of RollCall.com on October 14. Roll Call is a widely read publication among lawmakers and their staffs on Capitol Hill.

The article, A ‘Cadillac’ Tax That Looks Like a Lemon, notes that “health reform was supposed to fix what was broken, not dismantle the employer-based health system that successfully covers more than 175 million Americans. As representatives of businesses and working people, we see the 40 percent ‘Cadillac tax’ on health benefits as a serious attack on our shared future.”

Pursuant to the Affordable Care Act (ACA), starting in 2018 a nondeductible 40 percent excise tax will be imposed on employer-sponsored coverage that exceeds certain thresholds ($10,200 for self-only, $27,500 for family).

The Council and LIUNA are among the organizers of the Alliance to Fight the 40, a diverse coalition of public and private sector employers and labor unions united to advocate for repeal of the 40 percent tax. Since the Alliance’s launch in the spring, its members have made dozens of Capitol Hill visits to explain the negative implications of the tax. 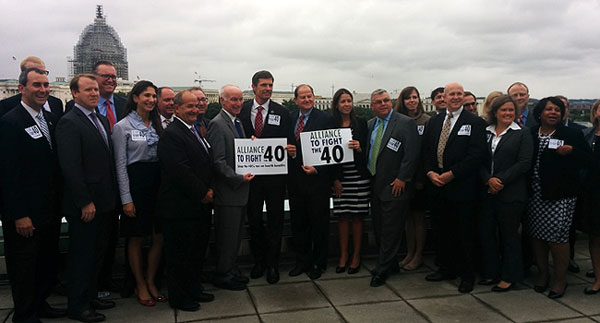 ABOVE: Council President Jim Klein poses with Rep. Courtney, Sen. Heinrich and other members of the Alliance to Fight the 40

The Alliance continues to welcome additional participation and support and we strongly urge Council members to join this coalition. . For more information on the 40 percent tax issue or the Alliance to Fight the 40, contact Jim Klein, president or Katy Spangler, senior vice president, health policy, at (202) 289-6700.

There were important developments recently in court cases in which the American Benefits Council weighed in to support the employer-sponsored benefits system.

On October 1, the U.S. Seventh Circuit Court of Appeals ruled in favor of a health plan in the case of Pennsylvania Chiropractic Association et al. v. Independence Hospital Indemnity Plan (formerly known as Independence Blue Cross), holding that the chiropractor plaintiffs were not beneficiaries as ERISA uses that term and thus not entitled to the claims procedures established by ERISA Section 1133 and U.S. Department of Labor regulations. The dispute concerned amounts that the chiropractors received under their participating-provider contracts with Indepedence Blue Cross.

The ruling reverses a U.S. District Court for the Northern District of Illinois (Eastern Division) ruling for the plaintiff chiropractors, which held that a payment of money for medical services covered in the relevant insurance plans constituted a ‘benefit’ under ERISA and that the providers should be considered beneficiaries because the plan expressly designates them to receive payment directly, and those payments constitute ERISA benefits.

The Council’s amicus (“friend of the court”) brief urged the Seventh Circuit to overturn the district court ruling, arguing that the lower court fundamentally misconstrued ERISA’s statutory definition of “beneficiary,” which applies only to those persons who are “entitled” to benefits under the terms of a plan. This trial court holding could have led to wide-ranging disputes and potential litigation as to who has the proper claim to a particular ERISA right under the plan. The Council is gratified by the appeals court’s ruling.

The Council, joined America’s Health Insurance Plans (AHIP), in filing an amicus (“friend of the court”) brief urging the U.S. Supreme Court to review the case to determine whether a claims administrator with no obligation to pay benefits under an ERISA plan is an appropriate defendant in a claim for benefits under the plan.

The litigation was initiated by Spinedex, a provider of chiropractic services, which brought ERISA claims challenging the sufficiency of payments made to it by a self-funded health plan. Spinedex sued the plan and UnitedHealth Group, the plan’s claims administrator. The federal district court dismissed the claims against United on the grounds that it had no obligation to pay benefits and thus could not be named as a defendant in a claim for benefits. The U.S. Court of Appeals for the Ninth Circuit reversed and held that an administrator with discretionary authority concerning the payment of benefits was a proper defendant in a claim for ERISA benefits.

This is a troubling development since the decision of the Supreme Court not to hear the case, leaves in place the Ninth Circuit’s ruling – at least with regard to suits brought in courts within the states that comprise the Ninth Circuit – Alaska, Arizona, California, Guam, Hawaii, Idaho, Montana, Nevada, Oregon and Washington.

As we reported in the October 8 Benefits Byte, the The U.S. Supreme Court also recently announced that it will not hear the case United Refining Company v. Cottillion, in which a plan sponsor attempted to recover pension plan distributions erroneously paid through a misinterpretation of plan documents that was subsequently corrected. Approximately 10,000 cases are annually submitted for the Supreme Court’s review. They typically grant and hear oral arguments for only 75 to 80 cases per year.